“Five stars! It allows us to move stoves in and out of homes with very little physical involvement, minimizing the risk of injury and reduces any physical damage to the customers property.”

Here is a new success story about another stove, chimneys & fireplace company. At Movex, we like helping installers working safely and efficiently and that is why we have a lot of demand for the Domino Automatic in this industry. Short’s Stoves, Chimneys & Fireplaces, Inc. represents one of many businesses which loves the Domino Automatic.

Ben and his brother are the co-owners of Short’s Stoves, Chimneys & Fireplaces, Inc. They are a family-owed company serving Berks and Lancaster counties in Pennsylvania. They have more than 24 years of experience in the industry and have approximately 5 employees. Their specialty is obvious! They sell wood, pellet, gas stoves, fireplaces and inserts alongside their accessories. They have an impressive showroom of around 60 units and tool sets, grates, fireplace doors, screens, and hearth accessories. The business is known for constructing the most beautiful, elegant, and exclusive fireplaces in the Berks and Lancaster Counties and surrounding areas.

Like any fireplaces company, installers must carry bulky loads up and down the stairs. The stoves are heavy, and it became tough for Short’s Stove to move some of them downstairs, especially when it involved Bilco basement doors. The business has another equipment other than the Domino Automatic, but “it is very heavy itself and labour intensive (manual) and has its limitations.” Had they not bought the Domino Automatic, they would have run the risk of injury, resulting in lost down time.

Ben and his company also tried one of our competitors’ stair climbers: “We have had an electric stair climbing dolly for 24 years and it served us well in the early days. As stoves are becoming heavier and we are getting older, we began to look for a better alternative.”

The Domino Automatic is the Solution:

One of their staff members started looking online for a better solution. After many discussions between the employees and the owners, they decided to choose a solution that requires less manual labour, can climb stairs without damaging flooring and easy to operate. The Domino Automatic checked all the boxes.

As soon as they received the Domino Automatic, they wanted to test it. They were excited to try it, but they first read the operations manual carefully then took it on a test drive. It went fairly easy, and their employees were very impressed by the stair crawler. Ben also confirmed: “It exceeded our expectations!”

The stair climber is useful for moving wood, pellet, and gas stoves from their warehouse to the customer’s residence. We asked the owner what he loved most about the product and here is his answer: “What we like most is that we can move the stoves with very minimal physical labour involved, reducing the chance of injury. I highly recommend purchasing the accessories and an extra battery as they all have been a bonus!”

With the Domino Automatic, they can “perform an installation with fewer people and in a much safer manner which saves time and money.”  Ben doesn’t know if it gives them a competitive advantage, but he says it certainly impresses their customers! 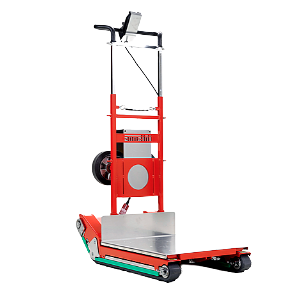 Read more information on the best solution to move a load up and down the stairs.

Here is what Ben has to say about the whole experience with Movex Innovation and Zonzini:

“It allows us to move stoves in and out of homes with very little physical involvement, minimizing chances for injury and reduces any physical damage to the customers property. It was a huge investment, but worth every penny! [We] would highly recommend [it] to anyone involved with moving heavy items as it has been a great addition to our business and our installers rave about it every time, they use it!”

Do you want to know more about Short’s Stoves, Chimneys & Fireplaces, Inc.? Click here to learn more about their well-stocked product line. 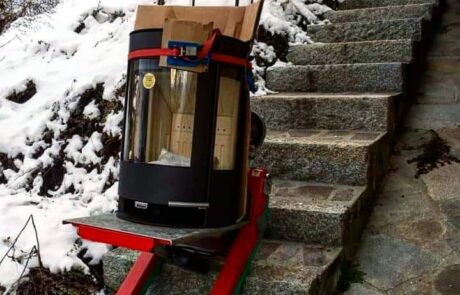 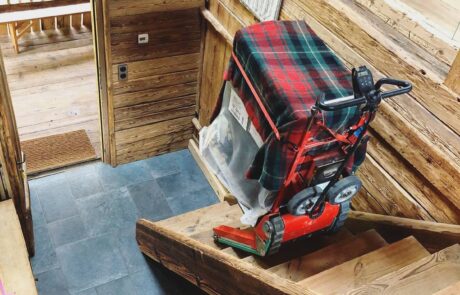 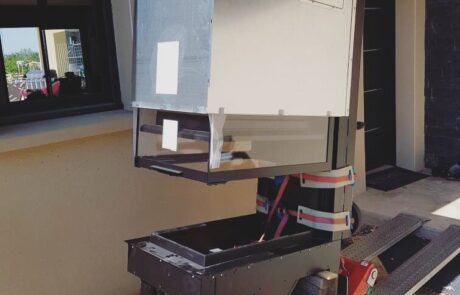 Interested? Ask for the price of the Domino Automatic.

A sales representative will send you an email in the next few hours. 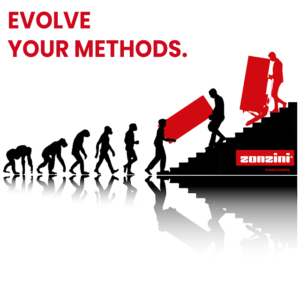 A market development specialist will get in touch with you in the next 24 hours.